I first noticed Cure thrift shop the first time I dropped my eldest at NYU. Trying to keep track of a lot of moving parts and moving stuff,  we drove past the shop and spied a bunch of funky mannequins, great furniture, doodads, and some rugs. I was smitten, but couldn’t go in. Our visits to the city rushed and packed with stuff to do, conspired to keep me away and so instead, I followed on Instagram.  Once during one of our rushed visits, my patient husband found a questionable legal spot to park and stayed with the car so I could go inside the store and browse.

I fell obsessively in like with two things: One, a typewriter which I swiftly talked myself out buying because I had a similar one already. I kicked myself about that for a while and eventually forgot about it. The other one was in my future. 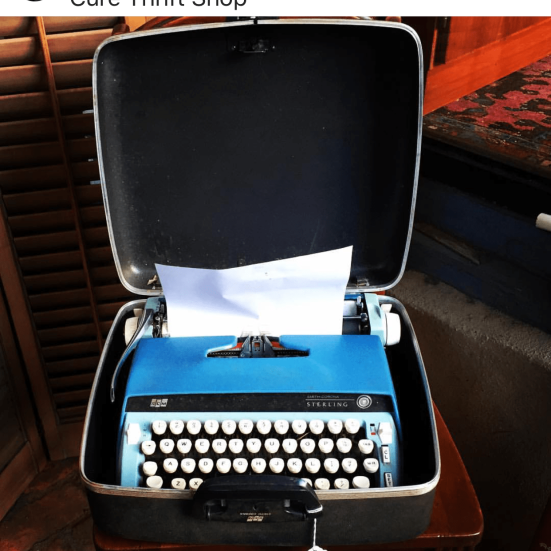 One day, while checking up on the Cure’s Instagram account I spied this little girl’s image (on the right) and she spoke to me (not in the magical-realism way) but I instantly liked her. I dm’ed the store and after asking about shipping, I got no response.  I thought about her often. I was a bit obsessed with the creative force which designed the Lokal Hotel and wanted to borrow some of their aesthetic for another soon-to-be unfinished decorating project. 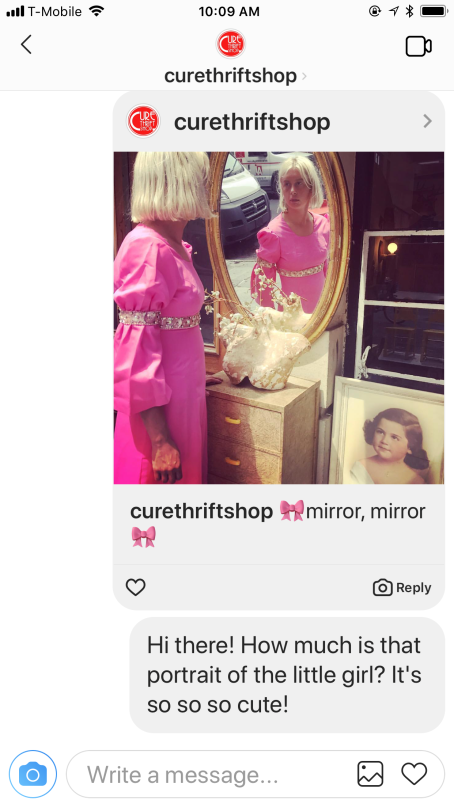 I came to NYC again, this time for moving our kid out of her dorm and it was raining like crazy.  I stopped in at the thrift shop for 2 hot seconds. It had been at least 6 months since I saw the print and I looked around for it but she was gone.  I tried to find a similar one, even buying a look-alike in an antique shop in Montpelier, Vermont. What I got was a photograph of a woman looking away from the camera, her gaze steely and somewhat vacant. A the time my kids wondered why I was getting prints of people who I didn’t know to hang in our home and it was too hard to explain. I was happy with my purchase but it was only a replacement for the print I really wanted. I had seen the print flash on the Cure’s feed once more, but I wistfully closed my phone instead of attempting to contact them again.

I’ve always had a connection to old photographs. There is an appeal to what memories they keep and I like wondering about what stories these people in these images created.  It’s a bit like going into their pasts an eavesdropping into a small part of their lives. Photographs play a big part in my upbringing and my theory is, that we had so much tragedy in our lives a photograph could capture joy and predictability and preserve those impressions for later just like pickled veggies for the winter time. On the more superficial level, however, remember: I had a decorating project  (number a million or so) which to date remains unfinished.

Well, it’s June 2018 and I am in NYC again. This time, I am alone and staying at my daughter’s apartment in the East Village. It’s been fun, trying to follow her advice for places to go. I like imagining what she sees daily as she goes out and pokes in to buy groceries around the corner or coffee at the cool place down her street. I’m mainly just exploring. She’s above a restaurant bar and the place transforms at night. Once the afternoon falls, the outfits get nicer and St. Marks place gets a bit of a mild Bourbon St. vibe and people definitely party late into the night.

I returned to the Cure thriftshop finally seizing the opportunity of being completely alone and without any pressing commitments. I saw another typewriter and decided to pass on it. It had a small crack and the fact that it was a bright canary yellow almost made up for the defect.

I poked around some more and while sliding hangers to get a closer look at the bodice of a shirt I liked, hiding behind a whole row of dresses was the print! I squashed the dresses off to one side of the rack and bent down to make sure I wasn’t seeing something else.

I went to the front and asked the salesperson about the incognito print in case it was hidden so well for a reason. I imagined that someone could have been holding it and wanted it out of sight. “Show me, ” he said as I made my way down the back of the store missing a hidden step once again but quickly getting my balance back. “Here!” I pointed and didn’t want to go indecorously go back digging behind the dresses. I saw him part the dresses like a theater curtain. “Oh, her?”  I was nervous he’d tell me that “her” was not destined to be mine. After all, twice she had been shown to the world on Instagram, and maybe she was part of some special collection that was attached to the shop, like the art on some of the walls. “Sorry, these are not for sale” some groovy objects were part of that sign.

My Cure man took the print out and held “her” in front of him wistfully looking at it as if a couple of memories came back.  “I posted the picture. I post all of our pictures for the feed.” he kept looking at her. “Do you want to buy it?” “Yes!” I would. I’ve never had a good poker face and asked for a discount. I could have tried a detached look of some sort to get a better deal,  but instead, I grinned and walked over to the register.  The Cure uses proceeds from sales to help diabetes research, so even if I was good at haggling, it wouldn’t feel right. I paid for my print and he tried unsuccessfully to find a bag that would fit. I hadn’t thought much of what kind of hell awaited me walking with a framed print through the busy streets of NY one of the hottest days of the summer so far.  ” So, do you think she’s Italian or Spanish?” I bristled a bit. I didn’t like it when people refer to Spanish-speaking people as  Spanish. This guy was a New Yorker, and I bet that’s the thing here. “Not sure…” I let my voice trail off and we both took notice of the little necklace with a medal on it. ” Catholic?”  He took a closer look. “Maybe a saint or somethin’, like St. Anthony or St. Christopher.” He found some craft paper and wrestled some packing tape to try and origami a cover for the whole thing. He seemed so genuinely curious by the girl, that I could tell a part of him had formed an attachment.

“Take it to FedEx across the way. They can package it for you.” I thought that was a great idea. Unfortunately, across the way might have been some code for anything except a literal across the way, and instead, I wound up happily walking my print over to my daughter’s pad.

I hesitated to bring her on the bus ride back with me. I had no idea what to expect from the bus storage above the seat and putting the print down with the rest of the luggage seemed risky. Instead, I left it tucked in a closet, waiting for me to come back to get her. For a moment I considered displaying the print and having my daughter see it when she got back from her trip. Instead of startling her, I kept the print covered and tucked in a safe spot in one of the closets.

I am a Memoirist. I write about the intangible spaces between my Latino heritage and my American life, but I am also provoked by memoir as craft and its relationship to memory, especially in the digital age. I'm the less than graceful portrait of work life imbalance, because like most parents I've evolved into a swiss-army knife of activities and interests which frankly makes me the mistress of none. View all posts by birdrobot